However, there are a few things to think about before you learn how to invest in Bitcoin. In this article, we’ll explain your options, what you need to know, and different investment strategies you can use for this method of making money online.

What is Bitcoin and Why Is it so Popular?

If you don’t know what it is yet, Bitcoin is a form of digital cryptocurrency that was created to conduct transactions with the aim to hopefully replace fiat currencies like the Dollar and Euro in the future.

It was launched in 2009 by Satoshi Nakamoto, and it’s peaked the interests of people around the world as a new form of investment as well as the future of money as we know it.

The dips and rises of Bitcoin’s value have definitely been a wild ride. The prospects of investing in Bitcoin and making money with other cryptocurrencies are both exciting and risky.

Its value can jump one day and crash the next minute. Many are regretting not investing before its value skyrocketed but also many are asking if now is a good time to invest in Bitcoin.

But is there a trend? If so, you might be asking “Should I invest in bitcoin?”.

How to Invest in Bitcoin: The Strategy for Your Success

What is the best way to invest in bitcoin? Before you jump in investing in Bitcoins left and right and hoping their value doubles, triples, quadruples, or more to make extra money, you need to do a few essential things before you buy bitcoin:

You should also make sure you read about Bitcoin’s history and market performance, and follow the news about Bitcoin and what current events are affecting Bitcoin’s value.

This will take time and a lot of self education, but if you want to watch your investment grow, this is absolutely necessary in how to invest in Bitcoin.

Staying informed with the news and how to invest in Bitcoin will help you make educated guesses on when you should sell or hold your Bitcoin investment.

Look at Bitcoin investing like you would a stock market

Yes, Bitcoin is new, exciting and proving to be the future of money. But you know what it shares in common with the stock market? Market cycles. Surprised? You shouldn’t be.

The only difference between a stock market and Bitcoin is that Bitcoin’s market cycles are shorter and much more volatile. So if you know nothing about investing, take some time to learn about the stock market cycles and see how those signs can apply to Bitcoin.

Learn the signs of market cycles

More importantly, this can help you study and learn how to start to invest in Bitcoin and when would be the best time to enter the market.

There are several different types of trading strategies people use ranging from day trading, short-term or long-term investments. Any strategy used is entirely up to you and what you are comfortable doing whether you like high or low risk investments.

While there isn’t a foolproof one-size-fits-all strategy for how to invest in Bitcoin, learning about market cycles’ terms and trends can help you create a strategy that works for you.

If you’re wanting to learn a little bit about the market cycles in Bitcoin and cryptocurrency, check out this awesome video by Chris Dunn!

One of the hardest lessons in how to invest in Bitcoin and any other investment for that matter is to not be emotionally attached.

It can be so easy for anyone to be swept up in the rush to BUY BUY BUY and then panic the moment an investment is dipping.

The problem with letting emotions dictate when you buy, sell or hold is that you’ll ultimately lose your investment.

The best thing to do to prevent this is to find an investment strategy that works for you and stick to it. It will take discipline but it will pay off in how to invest in Bitcoin in the long run.

Getting Started on the Road to Financial Freedom

Okay so you’ve decided to buy Bitcoin and need to know where you start. You’ll need: 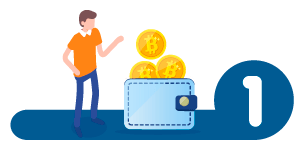 An online or offline method of storing your Bitcoins once you have purchased them. This is one of the first and most important things you’ll need when you start buying Bitcoins.

There are several options available on the market ranging from online accounts, offline software, offline drives and paper wallets. If you want to learn more about which will work for you, check out our guide on how to choose a Bitcoin wallet. 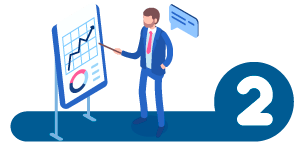 There are several online exchange platforms where you can buy, sell and trade Bitcoin and other cryptocurrencies. Most are quite easy to use and will exchange your fiat currency into Bitcoin or any other desired cryptocurrency.

Depending on where you’re located, there may be an exchange platform that works best for your operating fiat currency to be exchanged into Bitcoin. From there you can learn how to invest in Bitcoin, watch the market and make money with bitcoin!

The platform we would recommend the most is Coinbase, as it is very easy to use reliable and can accommodate most cryptocurrencies. You can find them here and sign up to get started as soon as possible!

And that’s it! It’s really easy to get started on how to invest in Bitcoin as you only need 2 tools.

How to Invest in Bitcoin: Day Trading or Long Term Trading?

With Bitcoin’s growth in the past several months, one may ask if day trading or long term trading is better. The answer is: it’s entirely up to you.

Here are several questions for you to think about before you decide how to invest in Bitcoin:

Think through your answers as this can help you decide what type of strategy you may want to look and in how to invest in Bitcoin.

Here are a few reasons why some like long-term investments:

Long-term investments could last around 6-12 months or even longer if the investor so chooses.

Investors don’t have to keep as close of an eye on the market. This doesn’t mean you don’t watch at all but small rises and falls aren’t going to affect you as much.

As an investor, you might have found a cryptocurrency or strongly believe that Bitcoin is going to play a greater role in the future.

If any of these reasons appeal to you then a long-term strategy may be a better option to consider. Many beginners to investing in general and how to invest in Bitcoin may prefer this route as it usually is less risky.

Here are a few reasons why some like day-trading investments:

Short-term investments could last anywhere between a few seconds to a few days before making a trade depending on the market.

Investors will have to keep a very close eye on the market prices as the next trade may depend on whether or not your investment reached a certain profit or to cut losses.

It is riskier and more prone to having some losses but also can be more profitable than long-term investments if done right.

While day-trading investment doesn’t sound as savoury, it is definitely a high-risk, high-reward option. If you are comfortable with trading and working in the cryptocurrency market then this may be more appealing to you.

You should also double check with whichever investing platform or method you are using and ask them, “Do you accept bitcoin?” These guidelines should help show you where to invest in bitcoin.

How to Invest in Bitcoin: Bitcoin Mining

Another method of how to invest in Bitcoin is to get involved with Bitcoin mining. What is Bitcoin mining? It’s the process of security and confirming transactions through the use of computer processing programs.

Once a transaction is confirmed and added to the blockchain or backbone of Bitcoin, a mining pool will be rewarded with Bitcoin.

What does it take? It takes dedicated computers with high processing power and steady electricity. Today, most people will get involved with mining pools where you pull together resources to contribute to the mining process.

If your mining pool confirms a block in the blockchain, you’re rewarded with Bitcoin to be divided among those in the pool.

If you want to learn more, check out our guide on how to mine bitcoin.

Is it worth using Bitcoin mining as a way how to invest in Bitcoin? That depends. If you can and want to contribute resources towards mining as your investment then it’s recommended to use a Bitcoin calculator to see if mining is a good option for you.

How To Invest in Bitcoin: Notes about Taxes and Governments

Your government may not have any regulations or taxes on earnings made from Bitcoin investments but that doesn’t mean that you shouldn’t check first.

If there are rules about how to declare your earnings on tax forms, restrictions or regulations about how to invest in Bitcoin in your country, you’ll need to know before you even start!

How to invest in Bitcoin might look confusing, risky and challenging at first but there are several ways to invest wisely and make a profit. The secret is to make sure you learn as much as you can before you jump in!

If you are still unsure about how to invest in Bitcoin, you can read our other articles on bitcoin and cryptocurrency we’ve compiled just for you.