Cryptocurrency is the future. You’ve probably heard terms like “cryptocurrency” and “Bitcoin” in conversations, news and social media very often these last few years you might even think they’re the same thing! However, Bitcoin is only a part of the cryptocurrency world. There are hundreds of different cryptocurrencies being developed, and many people are looking at trading cryptocurrency every day.

In this article, we’ll teach you how to buy cryptocurrency so you can get started too!

How to Get Started with Cryptocurrency

Cryptocurrency isn’t just digital currency that is bought and sold to make money online: Its unique coding through encryption and blockchain technology is what makes cryptocurrency difficult to manipulate and counterfeit. It’s also built to be  decentralized from any governing institution.

Because of these features, cryptocurrency has become an exciting venture for financial investors and technology lovers alike. It’s disrupted how the world sees money and opens many doors about how digital currencies can move forward in the future.

One of the main issues people have about cryptocurrency is the fear that they are doing something wrong or illegal. Cryptocurrency’s sudden rise to fame in 2017 was a time for awesome wins and loses.

But due to it also being a largely new and unregulated industry, there were several governments who put in their own rules about how cryptocurrencies should be held accountable and taxed.

Some countries closed their doors to cryptocurrency trading all together.

Does that mean cryptocurrency itself is illegal? Not exactly. It’s simply just a new concept. Because it’s so new, hurdles like how to tax cryptocurrency, how to prevent scams and several other things that concern some government institutions must be dealt with. In time, many investors believe that most fears of the cryptocurrency industry and the government will dissolve.

But in the meantime, look into your country’s rules. If there are certain regulations that your government requires for investing and tax purposes, it’s best to know and follow these. However, if cryptocurrency is banned in your area then hopefully that will change soon!

What Cryptocurrency Should You Buy?

Probably the first and most popular choices for many asking how to buy cryptocurrency would be:

These are the four biggest and most popular cryptocurrencies on the market today and they’re very suitable to make money online for many reasons.

If you’re new to the cryptocurrency world and asking what’s the best cryptocurrency to buy and how to buy it, these are great places to start. Not only do they have proven track records of success but there is a lot information for you to follow and learn about each of them.

How does that help? Well if you’re looking for what cryptocurrencies would be best for transactions and/or investments, there’s plenty of resources out there. You can learn about what to look for in a cryptocurrency, when and how to buy, and how to invest in it.

If you want to be conservative when starting in your cryptocurrency journey, just buying and selling is completely fine and can be very lucrative. There’s also not that much skill, knowledge and time required, this opposed to taking advanced risks like day trading.

Also if you are looking to research less popular but potentially profitable currencies on the market, experimenting with these four established currencies is a great place to start.

Setting Up Wallets: Your First Step when Buying Cryptocurrency

There are several different types of wallets like online/offline software, hardware wallets and paper wallets. But when you are just starting out, you’ll be fine with just an online wallet so you can purchase your desired cryptocurrency and start conducting transactions. From there, you can choose which cryptocurrency to buy and also transfer to your bank.

Coinbase.com: This is the most popular web wallet on the market right now. While it is also a cryptocurrency broker, the wallet function itself makes the integration of buying and storing cryptocurrency online easy and smooth. From here, you can then transfer your cryptocurrency to another, more secure wallet option.

Exodus: This is a software wallet that stores your cryptocurrency directly to your computer. The software itself is compatible with several different cryptocurrencies and its design makes it easy to navigate and use.

Mycelium: This is one of the most popular mobile app wallets on the market. The main advantage of Mycelium is that you can store and access your cryptocurrency directly on your smartphone. But if you’re prone to losing your phone, it might not be the best option for you!

All of these are easy to set up and attach to your bank accounts. Note that they will also ask for ID verification for security purposes. From there, you can also invest in an offline software wallet that runs on your personal computer, a hardware wallet that is like a specialized USB or external hard drive that stores your cryptocurrency completely offline, or a paper wallet that you print and can store anywhere.

Check out our guide to setting up a cryptocurrency wallet if you’d like to learn more.

In order to withdraw your cryptocurrency you will have to complete the ID verification process.

Look for your desired cryptocurrency

Trading platforms can help you monitor the market value growth and demand. So when you want to buy or sell, you will have a pretty good estimate of the prices.

When you buy or sell cryptocurrency on an exchange you can place a bid range or specific price you want to pay for a determined amount of your desired cryptocurrency.

Kraken is one of the world’s largest cryptocurrency trading platforms on the planet. It offers a wide range of cryptocurrencies on the market and can be used in many countries.

It is a little bit intimidating for beginners, however, as it does take some learning and set up to get around the exchange, but it also has lower transaction fees compared to other exchanges. Finally, with it being available in most countries, it is one of the best options where to buy cryptocurrency online.

If you’re looking at how to buy cryptocurrency, direct trading is an interesting method to use. Unlike exchange platforms, this type trading involves buying and selling directly from other people in other countries instead of through a trading platform.

The benefit of this is that transaction fees are eliminated.

However, buying directly means that there is no set market price. Sellers have the liberty to set their own exchange rates and buyers have to find what exchange rate they are willing to pay.

Our Recommendation: Peer-to-Peer Lending or Trading 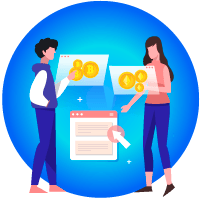 If you are looking to buy cryptocurrency by trade directly, this usually means you know someone or have friends who you want to trade with. Not very many use this option as it’s not entirely necessary. But if you’re in a country where regulations make buying and selling on exchange platforms more difficult, peer-to-peer lending may be a better option.

A cryptocurrency broker offers the exact same service as a trading platform where you go to a specific website to buy and sell cryptocurrency. However, unlike trading platforms where there is a fluctuating range of prices for an exchange, brokers set one fixed change rate for buyers and sellers.

The benefit for using a broker is that the fixed prices make it easy and straightforward for both parties. Yes, the broker will also take a premium percentage so it does have a ‘transaction fee’.

But it is the most straightforward way for anyone who prefers buying and selling this way. Also, if you’re just starting out and learning how to buy cryptocurrency, you might think trading platforms and direct trading are a little too messy and confusing to deal with. In that case, a broker might be the best option for you as it has generally less hassle. 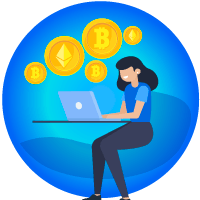 Learning how to buy cryptocurrency can be a bit intimidating at first but once you get into it, it can be a lot of fun! There’s just so much to learn about the technology behind it, its history and future and of course, there’s a lot of money to be made.

As you learned in the article, you can get started in less than 10 minutes with just 3 steps:

Despite the more expensive market prices, we recommend that you learn how to buy cryptocurrency using reputable cryptos like Bitcoin, Ethereum, and Litecoin. You can have some exciting results with them. Overall, the future for cryptocurrency is bright. So make educated purchases and trades, watch the market and most of all, enjoy the adventure!